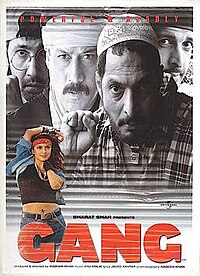 Gang is a 2000 Indian Hindi-language gangster film directed by Mazhar Khan. The film stars Nana Patekar, Kumar Gaurav, Javed Jaffrey, Jackie Shroff, Juhi Chawla and Imtiaz Khan in pivotal roles. The film began production in 1990 and was delayed for 10 years because of director Mazhar Khan's ill health. After his death in 1998, his assistant director helped complete the film for release on 14 April 2000. The film was also the last to feature music by RD Burman who died in 1994.

Four friends, Gangu (Jackie Shroff), Abdul (Nana Patekar), Nihal (Kumar Gaurav) and Gary (Jaaved Jaffrey)- which forms the word G.A.N.G, get together to start their crime business, but their roots are built on friendship and trust. They succeed in their criminal goals but later they are attacked by a local gangster Tagdu (Gulshan Grover). As a result, G.A.N.G. retaliate with Tagdu and joins with Lala (Mukesh Khanna) a criminal leader with a conscience. But this does not pleases Abdul as they work for free with Lala and decides to join forces with Girja Singh (Imtiaz Khan) another gang leader for money, to which Gangu disagrees. Gary's sister is later killed by Tagdu's men as a form of early humiliation which shatters them deeply. Later G.A.N.G. and Tagdu's men are embroiled in a gang war, in which Gangu is arrested and sentenced to jail for five years.