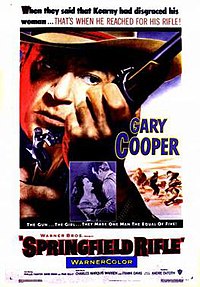 Springfield Rifle is a western film, directed by Andre DeToth and released by Warner Bros. Pictures in 1952. The film is set during the American Civil War and stars Gary Cooper, with Phyllis Thaxter and Lon Chaney Jr..

A confederate spy has been informing rustlers about the timing and route of horse herds being driven by the Union Army, enabling the herds to be seized. Charged with cowardice when he abandons such a herd in the face of greater numbers, Major Lex Kearney is drummed out of the Union Army with a dishonorable discharge. His disgrace is complete, with wife Erin even informing him that their ashamed son has run away. What no one knows is that Kearney has accepted a fake discharge so he can carry out a top-secret assignment to go undercover to find the rustlers and the spy who has been giving them the information. A shipment of the new rapid loading Springfield rifles arrives, providing an opportunity.