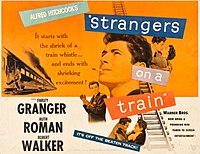 Strangers on a Train is a 1951 American psychological thriller film noir produced and directed by Alfred Hitchcock, and based on the 1950 novel Strangers on a Train by Patricia Highsmith. It was shot in the autumn of 1950 and released by Warner Bros. on June 30, 1951.

Amateur tennis star Guy Haines wants to divorce his vulgar, promiscuous wife Miriam so he can marry Anne Morton, the daughter of a US Senator. On a train, smooth-talking psychopath Bruno Antony recognizes Haines and in conversation mentions his idea for a murder scheme: two perfect strangers meet and "swap murders" Bruno suggests he kill Miriam and Guy kill Bruno's hated father. Each will murder a total stranger with no apparent motive, so neither will be suspected. Guy humors Bruno by pretending to find his idea amusing, but is so eager to get away from Bruno that he leaves behind his engraved cigarette lighter, which Bruno keeps.