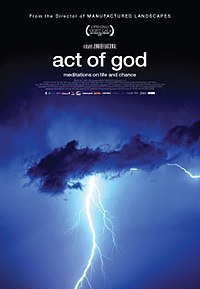 Act of God is a 2009 Canadian documentary film that investigates the "metaphysical" effects of being struck by lightning. It was directed by Jennifer Baichwal (Manufactured Landscapes) and distributed by Zeitgeist Films. The film's world premier was at the 2009 Hot Docs Canadian International Documentary Festival at the Royal Ontario Museum in Toronto on 30 April 2009. It went on general release in Canada on 1 May 2009, and limited release in the United States on 31 July 2009. The film's European premiere was at the 44th Karlovy Vary International Film Festival in the Czech Republic on 11 July 2009.