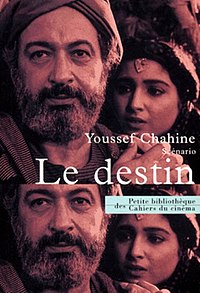 Destiny (, translit.Al-massir) is a 1997 French-Egyptian historical drama film directed by Youssef Chahine. It was screened out of competition at the 1997 Cannes Film Festival. The film was selected as the Egyptian entry for the Best Foreign Language Film at the 70th Academy Awards, but was not accepted as a nominee.