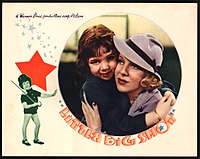 Little Big Shot is a 1935 American film directed by Michael Curtiz, starring Sybil Jason and Glenda Farrell. The film was released by Warner Bros. on September 7, 1935. A young girl endears herself to her caretakers after her father is murdered by mobsters.

Mortimer Thompson (Edward Everett Horton) and Steve Craig (Robert Armstrong) are a pair of sidewalk confidence men working Broadway one step ahead of the police selling phony watches. Broke, they arrange to have dinner with Gibbs, an old friend, thinking he will help them with some money. Gibbs and his young daughter Gloria (Sybil Jason) don't have much money, either, and think that Steve and Mortimer can help them. On top of needing money, Gibbs is in hiding from notorious gangster Kell Norton. After Steve, Mortimer, Gibbs and Gloria finish their dinner, Gibbs is shot and killed by Norton's men as the group leaves the restaurant. Steve and Mortimer hurry to leave before they too get shot, hastily leaving Gibbs' daughter Gloria behind. Steve reminds Mortimer that they forgot about Gloria. Despite Mortimer's protestations, Steve convinces him to go back for the girl.