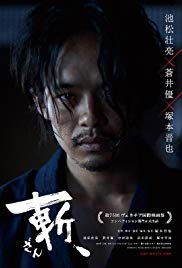 is a 2018 Japanese drama film directed by Shinya Tsukamoto. It was selected to be screened in the main competition section of the 75th Venice International Film Festival.

Mokunoshin Tsuzuki is a wandering young samurai without a master. He stops in a village of poor peasants to protect them and help them harvest rice. He trains himself by crossing the sword with Ichisuke, the teenage son of the host family. One day he comes to Sawamura village, an elderly samurai, determined to recruit other warriors to go to Kyoto and fight in the civil war. Tsuzuki agrees to follow him. Sawamura also welcomes the enthusiastic but inexperienced Ichisuke, even if Yu, the latter's sister, is against it. In that, however, a group of disbanded outlaws also arrive at the village, led by Sezaemon Genda. Tsuzuki initially manages to maintain good relations with Genda, but Ichisuke provokes the outlaws, who beat him. Against the advice of Tsuzuki, who would like to keep the peace, Sawamura decides to defend the honor of Ichisuke, who is now one of him. The samurai thus slaughters a large part of Genda's gang. The survivors retaliate by killing Ichisuke. Yu, devastated by her pain, pushes Tsuzuki to avenge her brother. But Tsuzuki, who has never killed anyone, fails to deal with the outlaws, who come to rape Yu under the eyes of the samurai. Only Sawamura's intervention saves them: the man kills Genda and the other bandits, but is seriously injured. At the time of leaving for Kyoto, however, Tsuzuki is not found. Sawamura chases him: Tsuzuki has evaded his duty, and will therefore be forced to kill him. When the two are finally face to face, however, it is Tsuzuki who kills Sawamura.