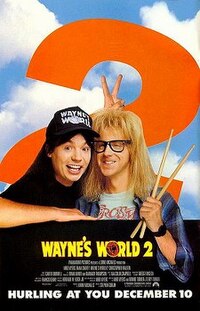 Wayne's World 2 is a 1993 American comedy film directed by Stephen Surjik and starring Mike Myers and Dana Carvey as hosts of a public-access television cable television show in Aurora, Illinois. The film is the sequel to Wayne's World (1992), which was itself adapted from a sketch on NBC's Saturday Night Live.

Rock and roll fans Wayne Campbell and Garth Algar now host their public-access television show, Wayne's World, from an abandoned factory in Aurora, Illinois. After an Aerosmith concert, Wayne has a dream in which he meets Jim Morrison and a "weird naked Indian" in a desert. Morrison convinces Wayne that his destiny is to organize a major music festival. Wayne and Garth dub the concert "Waynestock" (a pun on "Woodstock") and hire Morrison's former roadie, Del Preston. Their early attempts to sign bands and sell tickets fail, and Wayne wonders if the endeavor is futile.