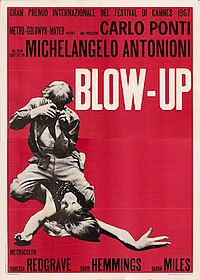 After spending the night at a doss house, where he has taken pictures for a book of art photos, photographer Thomas is late for a photo shoot with model Veruschka at his studio, which in turn makes him late for a shoot with other models later in the morning. He grows bored and walks off, leaving the models and production staff in the lurch. As he departs the studio, two teenaged girls who are aspiring models ask to speak to him, but Thomas drives off to visit at an antique shop.