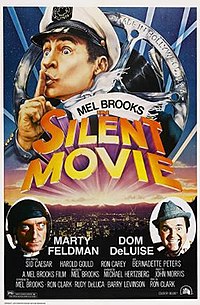 Silent Movie is an American satirical comedy film co-written and directed by and starring Mel Brooks, released by 20th Century Fox in the summer of 1976. The ensemble cast includes Dom DeLuise, Marty Feldman, Bernadette Peters, and Sid Caesar, with cameos by Anne Bancroft, Liza Minnelli, Burt Reynolds, James Caan, Marcel Marceau, and Paul Newman as themselves. The film is produced in the manner of an early 20th century silent film (but in color) with intertitles instead of spoken dialogue; the soundtrack consists almost entirely of accompanying music and sound effects. It is an affectionate parody of slapstick comedies, including those of Charlie Chaplin, Mack Sennett, and Buster Keaton. The film satirizes the film industry, presenting the story of a movie producer trying to get studio support to make a silent film, in the present-day of the 1970s.

Mel Funn (Mel Brooks), a once-great Hollywood film director, is now recovering from a drinking problem and down on his luck. He and his sidekicks Dom Bell (Dom DeLuise) and Marty Eggs (Marty Feldman) pitch to Big Pictures Studio's Chief (Sid Caesar) the idea to make the first silent movie in forty years. The Chief rejects the idea at first, but Mel convinces him that if he can get Hollywood's biggest stars to be in the film, it could save the studio from a take-over by New York conglomerate Engulf & Devour (Harold Gould and Ron Carey).