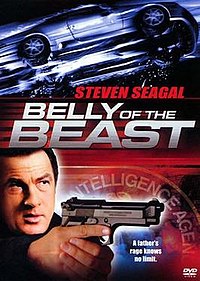 Belly of the Beast is a 2003 American action film directed by Hong Kong film director Ching Siu Ting in his American directorial debut, and also produced by and starring Steven Seagal. Steven Seagal plays Jake Hopper, a former CIA agent on a quest to find his kidnapped daughter. The film was released on direct-to-DVD in the United States on December 30, 2003; the film recouped its budget from the US home video market alone.

Jake Hopper (Steven Seagal) is a retired CIA agent and successful businessman in the private security business. Ten years before, as a CIA agent stationed in Thailand, things were going well until a fight with thugs resulted in his partner, Sunti (Byron Mann) escaping with his life after accidentally killing a woman. Jake called it quits and returned to the United States when his wife died, and Sunti became a Buddhist monk to atone for his sins. Jake has since been a devoted father to his now adult daughter Jessica (Sara Malakul Lane).