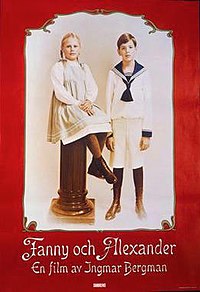 Fanny and Alexander is a 1982 period drama film written and directed by Ingmar Bergman. The plot focuses on two siblings and their large family in Uppsala, Sweden during the first decade of the twentieth century. Following the death of the eponymous children's father (Allan Edwall), their mother (Ewa Fröling) remarries a prominent bishop (Jan Malmsjö) who becomes abusive towards Alexander for his vivid imagination.

In 1907, young Alexander, his sister Fanny, and their well-to-do family, the Ekdahls, live in a Swedish town, running a moderately profitable theatre. At Christmastime, the Ekdahls hold a Nativity play and later a large Christmas party. The siblings' parents, Emilie and Oscar, are happily married until Oscar suddenly dies from a stroke. Shortly thereafter, Emilie marries Edvard Vergérus, the local bishop and a widower, and moves into his home where he lives with his mother, sister, aunt, and maids.