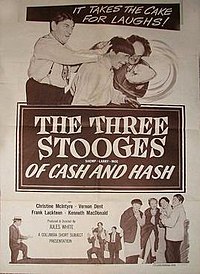 Of Cash and Hash is a 1955 short subject directed by Jules White starring American slapstick comedy team The Three Stooges (Moe Howard, Larry Fine and Shemp Howard). It is the 160th entry in the series released by Columbia Pictures starring the comedians, who released 190 shorts for the studio between 1934 and 1959.

The Stooges are mistaken for three armored car thieves after getting caught in crossfire. Captain Mullin (Vernon Dent) gives the boys a lie detector test, but finds no reason to hold them. He releases them, and they return to work at their restaurant, the Elite Café. Friend Gladys Harmon (Christine McIntyre) stops by the restaurant just as one of the real armored car bandits flees the scene. They then chase the bandit to a spooky old mansion where they and their hideous hatchet man, Angel (Duke York), are hiding. When the mob abducts Gladys, the Stooges come to her rescue and retrieve the stolen money.