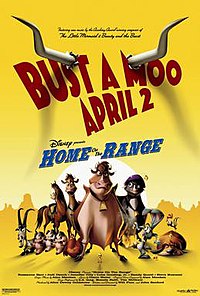 Home on the Range is a 2004 American animated Western musical comedy film produced by Walt Disney Feature Animation and released by Walt Disney Pictures. The 45th Disney animated feature film, it was the last traditionally animated Disney film released until The Princess and the Frog in 2009. Named after the popular country song of the same name, Home on the Range features the voices of Roseanne Barr, Judi Dench, Jennifer Tilly, Cuba Gooding Jr., Randy Quaid, and Steve Buscemi. The film is set in the Old West, and centers on a mismatched trio of dairy cows—brash, adventurous Maggie; prim, proper Mrs. Caloway; and ditzy, happy-go-lucky Grace. The three cows must capture an infamous cattle rustler named Alameda Slim for his bounty in order to save their idyllic farm from foreclosure. Aiding them in their quest is Lucky Jack, a feisty, peg-legged rabbit, and a selfish horse named Buck, eagerly working in the service of Rico, a famous bounty hunter, who seeks the glory for himself.

In May 1889, Maggie is the only cow left on the Dixon Ranch after Alameda Slim (a wanted cattle rustler capable of stealing 5,000 cattle in a single night) stole all the rest of Mr. Dixon's cattle. Dixon sells Maggie to Pearl Gesner, a kind, aging woman who runs a small farm called Patch of Heaven. The local Sheriff arrives to tell Pearl that her bank is cracking down on debtors. Pearl has three days to pay the bank $750, or her farm will be sold to the highest bidder. Hearing this, Maggie convinces the other cows on the farm (Grace, a happy-go-lucky character, and Mrs. Caloway, who has had leadership go to her head) to go to town to attempt winning prize money at a fair. While the cows are in town, a bounty hunter named Rico (whom Buck, the Sheriff's horse, idolizes) drops a criminal off and collects the reward. Stating he needs a replacement horse to go after Alameda Slim while his own horse rests, he takes Buck. When Maggie find out that the reward for capturing Slim is exactly $750, she convinces the other cows to try to capture him to save Patch of Heaven.