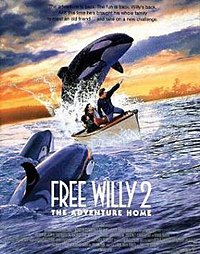 Free Willy 2: The Adventure Home is a 1995 American family film, directed by Dwight Little, and distributed by Warner Bros. under their Warner Bros. Family Entertainment label. It is a sequel to the 1993 film Free Willy, also starring Jason James Richter and August Schellenberg. Free Willy 3: The Rescue, was subsequently released in 1997, making a trilogy. A fourth nonconsecutive film, Free Willy: Escape from Pirate's Cove was released on DVD in Spring 2010. Keiko the Orca does not actually appear in this film unlike the original film. Willy is played by a robotic double while the Free Willy Keiko Foundation devised a plan to bring him to the Oregon Coast Aquarium where he would be rehabilitated for poor health.

It's been two years since Jesse (Jason James Richter) saved and freed his orca friend, Willy. Jesse, now 14 years old, has since been adopted by his foster parents, Glen and Annie Greenwood (Michael Madsen and Jayne Atkinson). Jesse and his adoptive parents are preparing to go on a family camping trip to the Pacific Northwest. Glen has been trying to teach Jesse to drive their motorboat, but Jesse is more interested in girls. However, before they leave town, Dwight (Mykelti Williamson), Jesse's former social worker, shows up to inform them that they have found Jesse's biological mother, who abandoned him 8 years ago in New York City. Jesse's mother has died and left behind another son, Jesse's younger half-brother named Elvis (Francis Capra). Jesse is devastated about this news, but comes to terms, after talking his feelings out with Glen. When Elvis arrives, he is morose, overly talkative and mischievous, and he is also prone to telling lies and easily gets on Jesse's nerves. He is invited on their trip to San Juan Island so that he and Jesse might get to know each other.