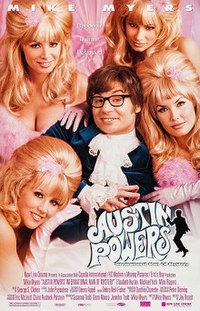 Austin Powers: International Man of Mystery (or simply Austin Powers) is a 1997 American spy comedy film directed by Jay Roach. It is the first installment in the Austin Powers series. It stars franchise co-producer and writer Mike Myers, playing the roles of Austin Powers and Dr. Evil, Powers' arch-enemy. Supporting roles are played by Elizabeth Hurley, Robert Wagner, Seth Green, and Michael York. The film is a parody of the James Bond films and other popular culture from the 1960s, centering on a flamboyant, promiscuous secret agent and a criminal mastermind, arch-nemeses who go into and come out of cryostasis at the same time as each other as their conflict spans decades.

In 1967, British spy Austin Powers thwarts an assassination attempt by his nemesis Dr. Evil in a London nightclub. Dr. Evil escapes to space in a rocket and cryogenically freezes himself. Austin volunteers to be placed into cryostasis in case Dr. Evil returns in the future.