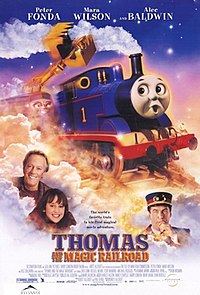 Thomas and the Magic Railroad 2000

Sir Topham Hatt and his family have left the Island of Sodor on holiday with Edward, leaving Mr. Conductor in charge of the engines. Gordon complains to Thomas, when Diesel 10 races by, scaring both engines. Meanwhile, in Shining Time, Mr. Conductor is suffering a crisis; his supply of magic gold dust is alarmingly low and not enough for him to travel back from Sodor. At Tidmouth Sheds, Thomas is talking to James, when Diesel 10 arrives and announces his plan to rid Sodor of steam engines by finding and destroying Lady, the lost engine, the key to steam engines living in peace. Thomas leaves to collect Mr. Conductor. Lady is hidden in a workshop on Muffle Mountain after Diesel 10's previous attempt to destroy her. Lady is unable to steam despite trying all of the coals in Indian Valley. At the sheds, the steam engines conclude that they should find Lady before Diesel 10, unaware that his oafish diesel minions Splatter and Dodge are spying on them. That night, Diesel 10 approaches the shed where the steam engines are sleeping and destroys the side of it with his claw. Mr. Conductor tries to keep him in order, but the gold dust fails and Mr. Conductor scares Diesel 10 away by threatening to pour a bag of sugar in his fuel tanks.