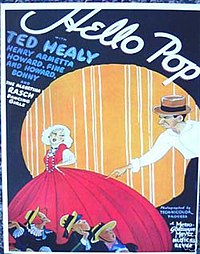 Hello Pop! is the third of five short films starring Ted Healy and His Stooges released by Metro-Goldwyn-Mayer on September 16, 1933. A musical-comedy film, the film also featured the Albertina Rasch Dancers and Bonnie Bonnell (Healy's girlfriend at the time). The film was considered lost until a 35mm nitrate print was discovered in Australia in January 2013. Stooges Moe Howard, Larry Fine and Curly Howard were billed as "Howard, Fine and Howard."

A theater producer (Healy) is trying to stage an elaborate musical revue. His efforts are constantly interrupted by demanding back stage personalities: a flaky musician (Henry Armetta), a woman who keeps try to ask him something (Bonnie Bonnell), and his raucous sons (the Stooges in children's costumes).