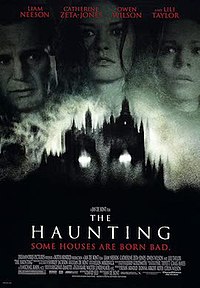 The Haunting is a 1999 American supernatural horror film directed by Jan de Bont. The film is an actionized reimagining of the 1959 novel The Haunting of Hill House by Shirley Jackson and its 1963 British psychological horror film adaptation with which it shares its name. The Haunting stars Liam Neeson, Catherine Zeta-Jones, Owen Wilson, and Lili Taylor. It was released in North America on July 23, 1999.

Eleanor "Nell" Vance (Lili Taylor), an insomniac, has cared for her invalid mother for 11 years. After her mother dies, her sister Jane (Virginia Madsen) and Jane's husband Lou (Tom Irwin) inherit the house. They eject Nell so they can sell it, and Nell faces homelessness. Nell receives a phone call about an insomnia study directed by Dr. David Marrow (Liam Neeson) at Hill House, a secluded manor in the Berkshires of western Massachusetts. She agrees to enter the clinical study. At the house, she meets Mr. and Mrs. Dudley (Bruce Dern, Marian Seldes), a strange pair of caretakers. Two other participants arrive, Luke Sanderson (Owen Wilson) and Theodora (or "Theo" for short) (Catherine Zeta-Jones), along with Dr. Marrow and his two research assistants. Unknown to the participants, Dr. Marrow's true purpose is to study the psychological response to fear, intending to expose his subjects to increasing amounts of terror. Each night, the caretakers chain the gate outside Hill House, preventing anyone from getting in or out until morning.