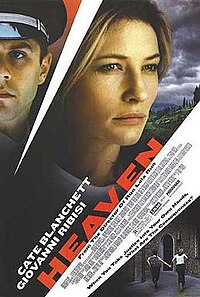 Heaven is a 2002 romantic thriller film directed by Tom Tykwer, starring Cate Blanchett and Giovanni Ribisi. Co-screenwriter Krzysztof Kieślowski intended for it to be the first part of a trilogy (the second being Hell and the third titled Purgatory), but Kieślowski died before he could complete the project. The film is an international co-production among producers based in Germany, France, Italy, the United States, and the United Kingdom. The dialogue is in Italian and English.

The film is set in Turin, Italy. It opens with a prologue sequence showing the young Italian Carabinieri clerk Filippo (Ribisi) learning to fly a helicopter using a flight simulator. When he accidentally crashes the virtual helicopter by ascending too dramatically, his instructor tells him, "In a real helicopter, you can't just keep going up and up", prompting Filippo to ask, "How high can I fly?"