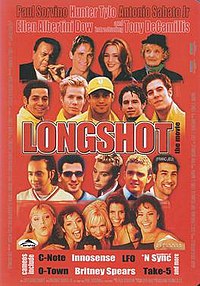 Longshot is a 2001 American comedy film directed by Lionel C. Martin, and written by Lou Pearlman, as a promotional tool to promote the acting debuts of his succession of successful boybands and girl groups, such as NSYNC, O-Town and Natural, as well as rapper Lil' Kim, singer Britney Spears, girlband Innosense and pop-hip hop trio LFO, all of whom had cameo appearances in the film, as Pearlman had worked with all of them during the late 1990s and early 2000s. Hunter Tylo, Paul Sorvino Antonio Sabato Jr., Zachery Ty Bryan, and Kenny Rogers star in the film and Spears has a cameo.

Alex Taylor lives in L.A. with his older brother, Jack, who works as a personal fitness trainer and sometime gigolo. Alex's classmates begin to harass him after he misses the game-winning shot at the end of one of his high school's basketball games. Meanwhile, Laszlo Pryce, a rich and corrupt businessman, discovers Jack's affair with his wife, Mitzi. Laszlo threatens to kill Jack and Alex unless Jack travels to New York City to seduce a widow named Rachel Montgomery. On the verge of selling her company, Laszlo wants Jack to relay any inside information he can discover about the impending transaction. Fearing for his younger brother's life, Jack brings Alex with him on the trip. The con begins to unravel when Rachel and Jack fall for each other while Alex similarly falls for Rachel's daughter, Kelly. Jack reveals to Rachel why he's in New York, and the two conspire to expose Pryce. Rachel, though, needs to raise two million dollars to save her company. In a stroke of luck, Alex wins a contest to shoot a halftime, half-court shot. If he makes it, Rachel keeps her company, Laszlo is arrested, and everyone lives happily ever after.