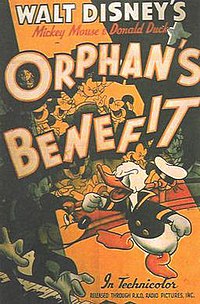 Orphan's Benefit is an animated short film produced by Walt Disney Productions. It was first released as a black-and-white cartoon in 1934 and was later remade in Technicolor in 1941 under the title Orphans' Benefit. The cartoon features Mickey Mouse and his friends putting on a Vaudeville-style benefit show for a group of unruly orphans. It contains a number of firsts for Disney, including the first time in which Mickey Mouse and Donald Duck appear together.

The mice orphans arrive at a theater for a free show entitled "Mickey's Big Show: Orphan's Benefit." As they file into the building and they are given free lollipops, ice cream, and balloons.