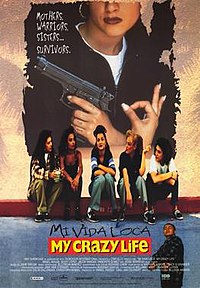 Mi Vida Loca (also known as My Crazy Life) is a 1993 American drama film directed and written by Allison Anders, produced by Cineville. It centers on the plight of young Mexicanas and Chicanas (and their male counterparts) growing up in the Echo Park section of Los Angeles, who face the struggles of friendship, romantic entanglements, and motherhood in a neighborhood ravaged by gang violence.

Mi Vida Loca tells the story of young Mexican-American women in Los Angeles and the struggles they have in a life of poverty and early motherhood while being members of an infamous street gang. Mousie and Sad Girl are best friends from childhood, growing up in Echo Park, a neighborhood that had a significant amount of gang activity in the late 1980s and early 1990s era.