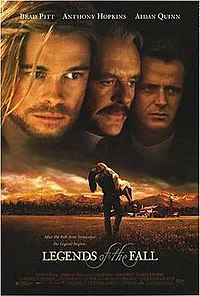 Legends of the Fall is a 1994 American epic historical drama Western film directed by Edward Zwick and starring Brad Pitt, Anthony Hopkins, Aidan Quinn, Julia Ormond and Henry Thomas. Based on the 1979 novella of the same title by Jim Harrison, the film is about three brothers and their father living in the wilderness and plains of Montana in the early 20th century and how their lives are affected by nature, history, war, and love. The film's time frame spans from the early 1900s, World War I, through the Prohibition era, ending with a brief scene set in 1963. The film was nominated for three Academy Awards and won for Best Cinematography (John Toll). Both the film and book contain occasional Cornish language terms, the Ludlows being a Cornish immigrant family.

Sick of betrayals the United States government perpetrated on Native Americans, Colonel William Ludlow leaves the Army, moving to a remote part of Montana. Along with One Stab, a Cree friend, he builds a ranch and raises his family. Accompanying them are hired hand and former outlaw Decker, Decker's Cree wife Pet, and daughter Isabel Two. William has three sons: Alfred, the eldest, is responsible and cautious; Tristan is wild and well-versed in Native American traditions; Samuel, the youngest, is educated but naive and watched over by his brothers.