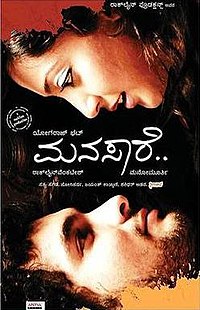 Manasaare is a 2009 Indian Kannada romantic psychological film directed by Yogaraj Bhat. It stars Diganth and Aindrita Ray in the lead roles. The film soundtrack and score was composed by Mano Murthy with lyrics by Yogaraj Bhat and veteran lyricist Jayant Kaikini.

Manohara "Manu" (Diganth) is an orphaned, unemployed young man, who is often looked down on upon by his family. However, his uncle (Achyuth Kumar) is the only exception. His friend Satish (Satish Neenasam) is a neighbour and cable operator, whose love for one of their neighhour - Bhamini, is unrequited. Bhamini marries a software engineer, and at the wedding reception, tells Manu that she loves him, but couldn't live with him (given his status). She also asks him to do something with his life, and not throw it away by spending his time criticizing the people around him. Meanwhile, Satish takes note of the "gulf" between Bhamini's new husband and himself, and decides to prove himself that he is indeed more worthy than she thinks of him. To that end, Manohar and Satish get together and invent a "electricity producing machine" which harnesses its power from vehicles that drive on roads (the fact that this isn't free energy, and that it would cost motorists who drive over it some extra fuel is not mentioned in the movie). His demonstration goes off well, but a police car chasing a criminal on a motorbike suddenly drives onto the machine, which causes the car to flip over, and in fact nearly kills the constables inside.