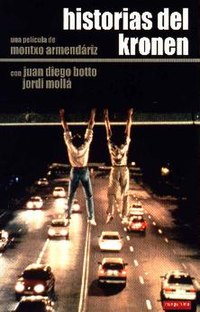 Stories from the Kronen 1995

Stories from the Kronen is a 1995 Spanish drama film directed by Montxo Armendáriz. Starring Juan Diego Botto and Jordi Mollà, the film is an adaptation of José Angel Mañas eponymous novel. It was entered into the 1995 Cannes Film Festival.

Carlos, Roberto, Pedro and Manolo form a group of friends in their early twenties with a lot of time on their hands during their summer vacation. The point of encounter for the group of friends is a bar called the Kronen, where Manolo, the least affluent among them, works as a bar tender and is the singer of a rock band. Carlos is the leader of the pack. He is handsome, selfish, amoral and hedonistic. He is in into a restless pursuing of pleasure: drinking, using heavy drugs, partying and having sex. Nothing seems to stop him. At Kronen Carlos rekindles a relationship with Amalia, an ex-girlfriend whose current boyfriend is coincidentally out of town. Amalia joins the group attracted by Carlos' good looks and charm. Roberto is Carlos best friend and sidekick. He plays the drums in the band where Manolo sings. More serious and more scrupulous than Carlos, Roberto has repressed homosexual feeling towards his best friend.