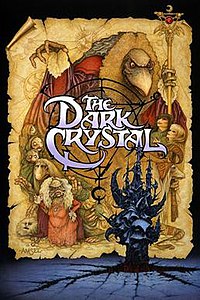 The Dark Crystal (sometimes referred to as Jim Henson's The Dark Crystal) is a 1982 puppet-animated high fantasy film directed by Jim Henson and Frank Oz. It stars the voices of Stephen Garlick, Lisa Maxwell, Billie Whitelaw, Percy Edwards, and Barry Dennen. The film was produced by ITC Entertainment and Henson Associates and distributed by Universal Pictures. The plot revolves around Jen, a Gelfling on a quest to restore balance to the world of Thra and overthrow the ruling Skeksis by restoring a powerful broken Crystal.

A millennium ago on the planet Thra, two new races appeared when a shard was shattered from the Crystal of Truth: the malevolent Skeksis whose continued corruption of the Crystal to extend their lives ravaged Thra, and the gentle urRu, more commonly known as the Mystics, who made their home in the Valley of Stones to await for their destiny. The leader of the urRu, the Master UrSu, raised a young Gelfling named Jen whose clan were slaughtered by the Skeksis. As the Great Conjunction of Thra's three suns draws near, a dying UrSu instructs Jen to fulfill a prophecy to heal the Crystal by first retrieving the Shard from Aughra. As UrSu passes, the Skeksis' Emperor also dies, with the Chamberlain skekSil exiled after losing a duel of succession against the General SkekUng. When the Skeksis learn of Jen's existence, they send their army of giant crab-like Garthim to capture him, with skekSil following.