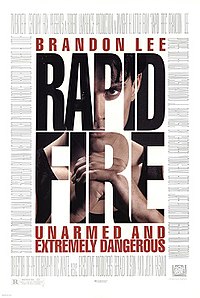 Rapid Fire is a 1992 American action film directed by Dwight H. Little and starring Brandon Lee, Powers Boothe and Nick Mancuso. The film was released in the United States on August 21, 1992. Lee was reportedly in talks with 20th Century Fox about making Rapid Fire 2, prior to his death.

The film opens in Thailand, with Antonio Serrano, a mafia drug distributor visiting long-time associate Kinman Tau, a drug kingpin. Serrano is having troubles and wants them to work together, but his request is not reciprocated.