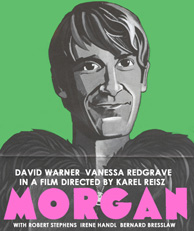 Morgan – A Suitable Case for Treatment 1966

Morgan Delt (David Warner) is a failed working-class London artist, who was raised as a communist by his parents. His upper-class wife, Leonie (Vanessa Redgrave), has given up on him and is in the process of getting a divorce in order to marry Charles Napier (Robert Stephens), an art gallery owner of her own social standing. Locked into a personal world of fantasy, Morgan performs a series of bizarre stunts in a campaign to win back Leonie, including putting a skeleton in her bed and blowing up the bed as her mother sits on it. When these stunts fail, Morgan secures the help of Wally "The Gorilla" (Arthur Mullard), a pro wrestler friend of his mother (Irene Handl), to kidnap Leonie, who still nurtures residual feelings of love tinged with pity for Morgan. Leonie is left with Morgan and Wally on the British countryside (with ironically intercut clips from Tarzan). Leonie soon gets rescued, and Morgan is arrested and imprisoned.