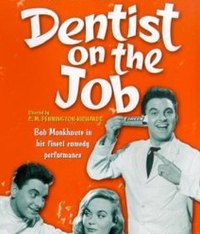 Dentist on the Job is a 1961 British comedy film directed by C. M. Pennington-Richards, the sequel to Dentist in the Chair (1960). It was released in the US with the title Get On with It!. The film was co-written by Hugh Woodhouse and Hazel Adair. It stars Bob Monkhouse, Kenneth Connor, Ronnie Stevens and Eric Barker repeating their roles from the previous film. Other actors appearing in the film include Shirley Eaton, Richard Wattis and Charles Hawtrey. Monkhouse, Eaton, Connor, Barker and Hawtrey had all previously acted together in unrelated 1958 comedy Carry On Sergeant.

Colonel Proudfoot (Barker) of Proudfoot Industries aims to entice a couple of dentists to advertise "Dreem", a revolutionary type of toothpaste, but he knows that if the dentists learn that they are part of an advertising campaign, they will be struck off. His cousin, the director of a Dental School (also Barker), sees his chance to rid the field of dentistry of two newly qualified incompetents David Cookson and Brian Dexter (Monkhouse and Stevens). However, once employed by Proudfoot, they set about improving on Dreem's terrible formula, and accidentally succeed in creating a much better toothpaste. Their attempts to convince Proudfoot of its merits are foiled by Proudfoot's assistant, Macreedy (Wattis).