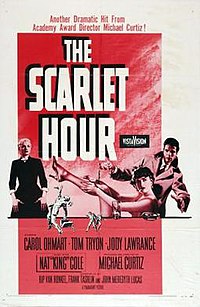 The Scarlet Hour is a 1956 American crime drama film directed and produced by Michael Curtiz, previously director of such noted films as Casablanca, Yankee Doodle Dandy and White Christmas.

E. V. Marshall, known to all as "Marsh," works for wealthy real-estate businessman Ralph Nevins and is having a romantic affair with Ralph's unhappy wife, Paulie. He asks her to get a divorce, but Paulie grew up impoverished and refuses to do without her husband's money.