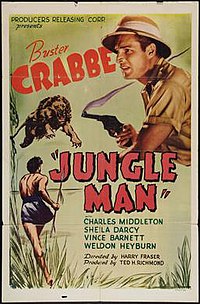 Jungle Man is a 1941 American film directed by Harry L. Fraser and starring Buster Crabbe in his first of many films for Producers Releasing Corporation. He is reunited with Charles B. Middleton from the Flash Gordon serials. Cinematographer and associate producer Mervyn Freeman (1890–1965)

Bruce Kellogg and his friend Alex are off to Africa on an expedition to the "City of the Dead" that is actually footage of Angkor Wat. Bruce's fiancée Betty and her father decide to go along to visit her father's brother James who is a missionary in the same part of Africa. Arriving at the Rev Graham's home they meet Dr Hammond who has spent five years developing a serum to a deadly fever that rages in the area. The results of his work are placed on a freighter to America that has been sunk by a submarine.