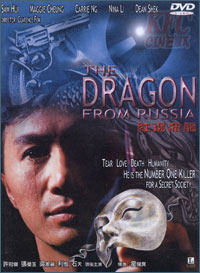 The Dragon from Russia is a 1990 Hong Kong martial arts action film directed by Clarence Fok and based on the Japanese manga Crying Freeman and written by Kazuo Koike and Ryoichi Ikegami, and also produced by Dean Shek, and starring Sam Hui, Maggie Cheung, Nina Li Chi, Carrie Ng, Loletta Lee and guest starring Shek in his second-to-last film appearance before retiring from acting in two years later.

Yao Lung and May Yip are orphans who live in Russia with their adoptive family. Through the years, the two fall in love and promise that they will be together forever. One fateful day, Yao witnesses a murder being committed by a mysterious assassin. Shortly after this, he is captured and brainwashed by a mysterious cult of assassins that call themselves "800 Dragons".