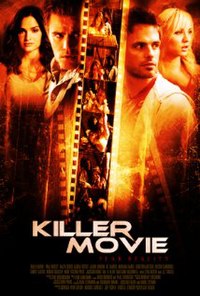 Killer Movie is a 2008 American slasher film released in the United States in on April 24. The film premiered during the 2008 Tribeca Film Festival in New York City. It stars Paul Wesley, Kaley Cuoco, Jason London, Torrey DeVitto and Leighton Meester and was written and directed by Jeff Fisher. Killer Movie was produced by Cornelia Ryan Taylor, Michael Sanchez and Jeff Fisher.

Television director Jake Tanner travels to a small town to film a reality television show about the town's hockey team. However, town local Jaynie is soon murdered, being decapitated by a piece of wire hung up between two trees, but the murder is passed off as an accident. Jake meets with the show's producers, Lee and Phoebe, who now want to investigate the murder.