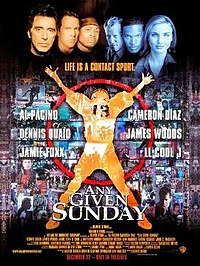 Any Given Sunday is a 1999 American sports drama film directed by Oliver Stone depicting a fictional professional American football team. The film features an ensemble cast, including Al Pacino, Cameron Diaz, Dennis Quaid, Jamie Foxx, James Woods, LL Cool J, Ann-Margret, Lauren Holly, Matthew Modine, John C. McGinley, Charlton Heston, Bill Bellamy, Lela Rochon, Aaron Eckhart, Elizabeth Berkley, and NFL players Jim Brown and Lawrence Taylor. It is partly based on the 1984 novel On Any Given Sunday by NFL defensive end Pat Toomay; the title is derived from a line in the book (also used in the film) that a team can win or lose on "any given Sunday", said by the fictitious coach Tony D'Amato.

The Miami Sharks, a once-great American football team, are struggling to make the 2001 Affiliated Football Franchises of America (AFFA) playoffs. They are coached by thirty-year veteran Tony D'Amato, who has fallen out of favor with young team owner Christina Pagniacci and offensive coordinator and D'Amato's expected successor Nick Crozier. In the thirteenth game of the season, both starting quarterback Jack "Cap" Rooney and second-string quarterback Tyler Cherubini are injured and forced to leave the field. The desperate Sharks call upon third-string quarterback Willie Beamen to replace them. While a nervous Beamen makes a number of errors and fails to win the game for the Sharks, he plays well and gains confidence. Rooney vows to make it back by the playoffs, with D'Amato promising to not give up on him.