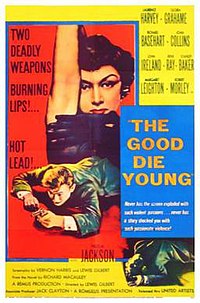 The Good Die Young is a 1954 British film noir crime thriller film made by Remus Films, featuring a number of American characters. It was directed by Lewis Gilbert. The screenplay was based on the book of the same name written by Richard Macaulay.

The film opens with four men in a car, apparently about to commit a serious crime. How each of the previously law-abiding men came to be in this position is then explored.