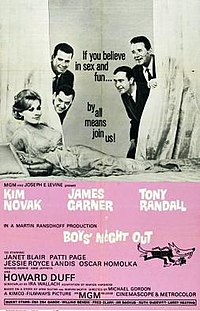 Boys' Night Out is a 1962 American romantic comedy film starring Kim Novak, James Garner, and Tony Randall, and featuring Janet Blair, Patti Page, Jessie Royce Landis, Oscar Homolka, Howard Duff and Howard Morris. The picture was directed by Michael Gordon and was written by Ira Wallach based on a story by Arne Sultan and Marvin Worth.

Three married men, George (Tony Randall), Doug (Howard Duff), and Howie (Howard Morris), and divorcé Fred (James Garner) are friends who commute to work from Greenwich, Connecticut, to New York City on the same train. Seeing Fred's philandering boss, Mr. Bingham (Larry Keating), with his mistress sets the men to fantasizing about sharing the expense of an apartment in the city as a love nest. As a gag, they give Fred the task of finding an unrealistically inexpensive apartment and a blonde "companion" to go with it.