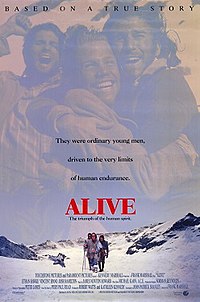 Alive is a 1993 American biographical survival drama film based on Piers Paul Read's 1974 book Alive: The Story of the Andes Survivors, which details a Uruguayan rugby team's crash aboard Uruguayan Air Force Flight 571 into the Andes mountains on October 13, 1972.

The film opens with a group of photographs of the Stella Maris College's Old Christians Rugby Team. Carlitos Páez points out several members of the team and reflects on the accident in a brief monologue.