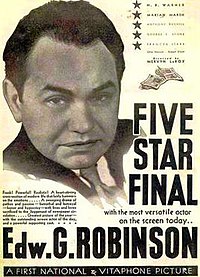 Five Star Final is a 1931 American pre-Code drama film about the excesses of tabloid journalism directed by Mervyn LeRoy and starring Edward G. Robinson, Aline MacMahon (in her screen debut) and Boris Karloff. The screenplay was by Robert Lord and Byron Morgan based on the 1930 play of the same name by Louis Weitzenkorn. The title refers to the practice of newspapers publishing a series of editions throughout the day, with their final-edition front page having five stars printed and the word "Final." "Five Star Final" is also a font introduced during World War I and then favored by newspapers for its narrow type.

Joseph W. Randall is the managing editor of the New York Evening Gazette tabloid newspaper who has been trying to legitimize the paper by reducing sensationalism and improving the reporting, but circulation has dropped dramatically. When owner Bernard Hinchecliffe plans to boost sales with a retrospective series on a 20-year-old murder, hoping to revive the scandal, Randall reluctantly agrees. He had covered the original story about stenographer Nancy Voorhees, who shot her boss after he reneged on his promise to marry her. Her pregnancy won the jury's sympathy, and she was acquitted.