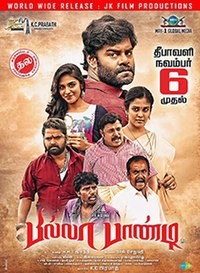 Billa Pandi, also spelled as Billa Paandi, is a 2018 Indian Tamil language romantic action drama film written and directed by Raj Sethupathy. The film stars R. K. Suresh, Chandini Tamilarasan, and Indhuja Ravichandran in the lead roles while Thambi Ramaiah, G. Marimuthu and Sangili Murugan play supportive roles. The music for the film is composed by Ilayavan while cinematography is handled by M Jeevan. A possible Hindi remake of the film was announced prior to the film's release during October 2018 and the remake rights were sold to Arihant, son of film producer Ashok Kumar with the remake is expected to go on floors from January 2019. The film was released on 6 November 2018 on the eve of Diwali. This film was average in the box office.

A die hard Ajith fan, Billa Pandi (R. K. Suresh), works as a construction contractor and dedicates the rest of his time to helping others in his neighborhood. He is in love with his aunt's daughter Valli (Chandini Tamilarasan), but life drastically changes for him when Jayalakshmi (Indhuja Ravichandran), whose family's house he'd recently constructed, falls in love with him.