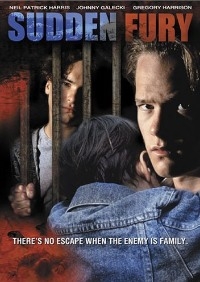 A Family Torn Apart (also known as Sudden Fury) is a 1993 American made-for-television crime drama film directed by Craig R. Baxley, based on the novel Sudden Fury: A True Story of Adoption and Murder by Leslie Walker, which itself is based on a true story.

The film begins with an unknown person hiding an axe covered with blood in the woods. It then focuses on Brian Hannigan, a teenager who contacts the police after the death of his adoptive parents, a double homicide. The investigators immediately see Brian as a suspect, because he was in the house when the murders occurred, is thought to have been too calm considering the circumstances, while also claiming to have heard nothing during the night his parents were murdered. Chris Hannigan, Brian's 7-year-old adoptive brother, tells the police that he saw his other adoptive brother, 17-year-old Daniel, an aggressive patient at a mental hospital, walking away from the house only seconds after the tragedy. Although Daniel denies having been at the house around the time of the murder, he becomes the prime suspect.