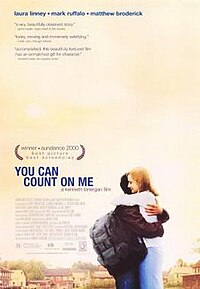 You Can Count On Me is a 2000 American drama film written and directed by Kenneth Lonergan (in his directorial debut) and starring Laura Linney, Mark Ruffalo, Rory Culkin, and Matthew Broderick. It tells the story of Sammy, a single mother living in a small Catskill Mountains town, and her complicated relationships with family and friends.

As children, Sammy and Terry Prescott lose their parents to a car accident. Years later, Sammy, a single mother and lending officer at a bank, still lives in her childhood home in a village in the Catskill Mountains region of New York, while Terry has drifted around the country, scraping by and getting in and out of trouble.