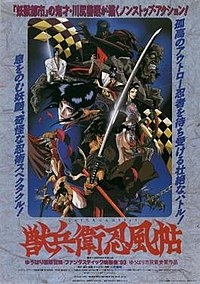 is a 1993 Japanese animated jidaigeki-chanbara film written and directed by Yoshiaki Kawajiri, starring the voices of Kōichi Yamadera, Emi Shinohara, Takeshi Aono, Daisuke Gōri, Toshihiko Seki and Shūichirō Moriyama. The film was a co-production between JVC, Toho and Movic, with Madhouse serving as the animation studio. Ninja Scroll was theatrically released in Japan on June 5, 1993, and received an English-dubbed release produced by Metro-Goldwyn-Mayer and released in Western countries through Manga Entertainment in 1995.

In Edo period-Japan, the mines gold in secret, and sends a shipment to the Toyotomi as payment for his protection. The Shogun of the Dark intends to use the gold to buy advanced Spanish weaponry and overthrow the current government, the Tokugawa Shogunate. The ship runs aground onto in a storm, and the , a ninja team with supernatural powers in the employ of the Yamashiro, kill the people of the nearby to keep the gold shipment a secret.