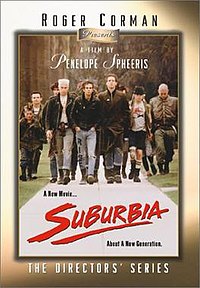 Suburbia, also known as Rebel Streets and The Wild Side, is a 1984 American coming-of-age drama/thriller film written and directed by Penelope Spheeris, and produced by Roger Corman, about suburban punks who run away from home. The kids take up a punk lifestyle by squatting in abandoned suburban tract homes. The punks are played by Chris Pedersen, Bill Coyne, Timothy Eric O'Brien and Red Hot Chili Peppers' bassist Flea, amongst others.

A hitchhiking teenage runaway, Sheila, is picked up on Interstate 605 in the Greater Los Angeles Area by a woman with a toddler. When the car gets a flat tire, they find a telephone booth on the edge of an abandoned tract housing district. While the mother is on the phone, the toddler is attacked and killed by a stray dog.