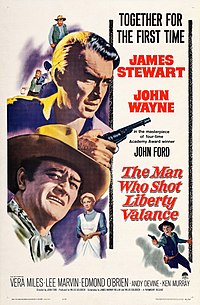 The Man Who Shot Liberty Valance 1962

The Man Who Shot Liberty Valance is a 1962 American dramatic western film directed by John Ford and starring John Wayne and James Stewart. The screenplay by James Warner Bellah and Willis Goldbeck was adapted from a 1953 short story written by Dorothy M. Johnson.

Senator Ranse Stoddard and his wife Hallie arrive in Shinbone, a frontier town in an unnamed western state, to attend the funeral of Tom Doniphon. As they pay their respects, local newspaper editor Maxwell Scott asks Stoddard why a United States senator would make the long journey from Washington to attend the funeral of a local rancher. Stoddard's story flashes back 25 years. Upon entering the territory as a young attorney, Ranse is beaten and robbed by Liberty Valance and his gang. Tom Doniphon finds Ranse and takes him to Shinbone. Ranse's wounds are treated by Tom's girlfriend, Hallie, and others, who explain to him that Valance terrorizes the residents, and the town's Marshal Appleyard is powerless to stop him. Tom is the only man who stands up to Valance, stating that force is all Valance understands.