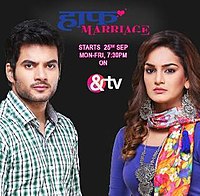 Half Marriage is an Indian television show which aired on & TV. It premiered on 25 September 2017 and ended on 27 April 2018. It was produced by Kavita Barjatya and Kushik Ghatak of Conscious Dreams. It starred Priyanka Purohit and Tarun Mahilani.

The show begins with the portrayal of the life of Chandni Kanaujia, the only daughter of Vanraj Kanaujia, a political leader of the Sanskar Sena. Chandni, an innocent and pampered young lady, lives her life in her own terms and is unaware of the reality. On the other hand, we get introduced to Arjun Sharma a hard working and responsible man. A chance encounter occurs between Chandni and Arjun and they develop a disliking towards each other.