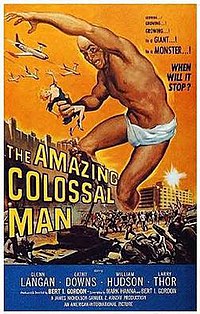 The Amazing Colossal Man (also known as The Colossal Man) is a 1957 American black-and-white science fiction film from American International Pictures, produced and directed by Bert I. Gordon, that stars Glenn Langan, Cathy Downs, William Hudson, and Larry Thor. It is an uncredited adaptation of Homer Eon Flint's 1928 short science fiction novel The Nth Man. It was theatrically released by AIP as a double feature with Cat Girl.

A test explosion of the first atomic plutonium bomb is planned at a military site in Desert Rock, Nevada. When it does not detonate as expected, Lt. Colonel Glenn Manning (Glenn Langan) receives orders to keep his men in the protective trench. Moments later, an unidentified small civilian aircraft crash-lands near the bomb site, and Glenn runs into the detonation area to rescue the pilot. Once in the detonation area, the bomb goes off, and Glenn is caught in the radiation.