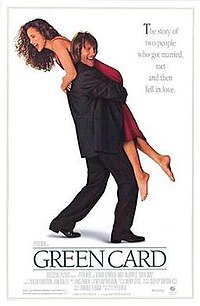 Green Card is a 1990 romantic comedy film written, produced, and directed by Peter Weir and starring Gérard Depardieu and Andie MacDowell. The screenplay focuses on an American woman who enters into a marriage of convenience with a Frenchman so he can obtain a green card and remain in the United States. Depardieu won the Golden Globe Award for Best Actor. The film won the Golden Globe for Best Motion Picture – Musical or Comedy, and was nominated for an Oscar for Best Original Screenplay.

Brontë Parrish (Andie MacDowell), a horticulturalist and an environmentalist, enters into a Green Card marriage with Georges Fauré (Depardieu), an undocumented immigrant from France, so he may stay in the United States. In turn, Brontë uses her fake marriage credentials to rent the apartment of her dreams. After moving in, to explain her spouse's absence, she tells the doorman and neighbors he is conducting musical research in Africa.