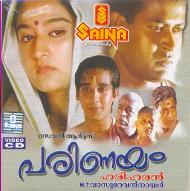 Unnimaya (Mohini), a young girl is married to Palakunnath Namboothiri (Jagannatha Varma), a man in his sixties. She is his fourth wife. Unnimaya is an educated girl hailing from Kizhakkedath Mana, a progressive family in Kerala. Due to various social and economic factors, she is compelled to marry Palakunnath Namboothiri, a rich gentleman. Coming from a progressive household, Unnimaya finds it hard to adjust with the severe orthodox practices at her new home. The sudden death of her husband brings her face-to-face with the customary rituals practiced among Namboothiri community towards widowed women. She realizes that her widowhood makes her almost a shunned individual - one who cannot participate in any celebrations, or even attend any music/dance events or performances. Kunjunni Namboothiri (Manoj K. Jayan), the elder son of Palakkunath, is the only person who shows compassion and support towards her. Kunjunni is actively involved in reformation among the Namboothiris and is considered as a rebel among the orthodox community. Unnimaya meets Madhavan (Vineeth), an upcoming Kathakali artist, and falls in love with him. They share some intimate moments, and later Unnimaya realizes that she is pregnant. The orthodox Namboothiri community is shocked when it learns about her pregnancy and decides to excommunicate her through Smarthavicharam. A group of senior Namboothiris, under the leadership of Moothedath Bhattathiri (Thilakan), conducts a series of rituals, first to extract the name of the one who impregnated her, and then later, to throw her out of the community. Unnimaya expects Madhavan to come save her, but he is unable to muster the courage to rescue her. Realizing that he is a coward and that she cannot expect him to deliver her out of the situation, Unnimaya decides to stand up to the orthodox Namboothiris. She answers their questions with clarity and confidence, angering them further. Ultimately, the decision is made to excommunicate her, and all the necessary rituals are completed. Kunjunni arrives as her savior. He gives her shelter at his home. The progressive Yogakshema Sabha, that he is part of, finds his ways too bohemian and dismisses him from the group. Madhavan, realizing his mistake, arrives to accept Unnimaya, but now she shows him the door declaring that he is not the father of her unborn child and that the fathers are Arjuna, Bhima, Nala (the heroic characters performed by Madhavan as part of his dance performances). Unnimaya involves herself in social service and becomes a Congress volunteer deciding to do something for the downtrodden society.