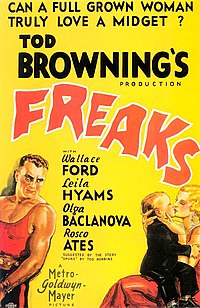 Freaks is a 1932 American pre-Code horror film produced and directed by Tod Browning, and starring Wallace Ford, Leila Hyams, Olga Baclanova and Roscoe Ates. It follows a trapeze artist who joins a group of carnival sideshow performers with a plan to seduce and murder a dwarf in the troupe to gain his inheritance, but her plot proves to have dangerous consequences. The film is based on elements from the short story "Spurs" by Tod Robbins.

A conniving trapeze artist named Cleopatra seduces a carnival sideshow dwarf named Hans after learning of his large inheritance, much to the chagrin of Frieda, his dwarf girlfriend. Cleopatra also conspires with circus strongman, Hercules, to kill Hans and inherit his wealth. Meanwhile, other romances flourish among the sideshow performers: the Bearded Lady, who is in love with the Human Skeleton, gives birth to their daughter. The news is spread among the friends by the Stork Woman. Additionally, Violet, a conjoined twin whose sister Daisy is married to Roscoe, the stuttering circus clown, becomes engaged to the circus's owner.